By this definition, here is the funeral pyre of a great man. 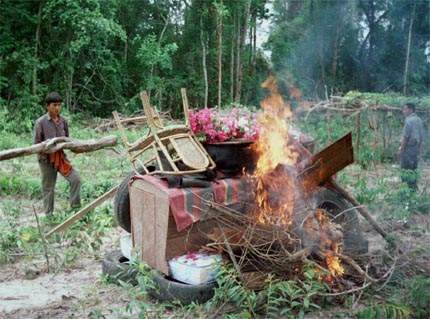 As can be seen, his departure was rather undignified. He was cremated on Saturday, April 18, 1998. His own household furniture, from where he lived his last days, provided wood for the funeral pyre. Yes, at the top of the heap, that is his chair which he used to sit in while being interviewed by reporters.

One important point about Pol Pot is often overlooked. He did not start out with the plan or intention of killing a million people. He apparently sincerely believed that he was going to create a better life for his people, just as Lenin, Stalin and Mao must have believed that they were going to benefit their people as well.

All Pol Pot really did was carry to their logical extremes the theories originally espoused by Marx and later modified by Lenin, Stalin and Chairman Mao.

When Lenin abolished the private ownership of land, he found it necessary to have a million small rebellious landowners killed, as he later bragged to Churchill.

Similarly, Pol Pot’s plan of evacuating the cities and putting everybody to work on collective farms was simply an extension of Mao’s policy.

What Pol Pot did was exactly what many Berkeley radicals I knew back in the 1960s advocated doing. Sure, many would have to be killed, they reasoned, but, in the long run, the people would be better off.

Nowadays, almost but not quite everybody realizes that these policies do not work.