According to both the New York Post and the New York Daily News, bastions of responsible news journalism, Mother Teresa died of massive heart failure brought on by the grief she suffered because of the death of her friend, Princess Diana, with whom she shared so much in common. 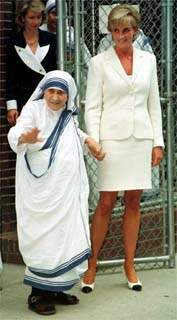 The New York Post, the New York Daily News and Newsday, the Long Island newspaper, all summed up the importance of the life of Mother Teresa by featuring photographs of her with Princess Diana.

Now that we know that Mother Teresa and Princess Diana will both go to the same place, here is a short quiz about the life of Mother Teresa:

1. Prior to establishing the Order of Missionaries of Charities in 1950, Mother Teresa was:

(a) A member of the Glorious Albanian Party of Labor.
(b) A high school geography teacher.
(c) Assigned to work in South Africa against Apartheid.
(d) Deported from Ireland.
(e) The personal assistant to Pope Pius XII.

(a) Help her raise funds for her Order of Missionaries of Charities in Calcutta.
(b) Introduce her to Princess Diana.
(c) Contribute money to educate black kids in Harlem.
(d) Give fair treatment to Albania.
(e) Provide her with free parking spaces in New York City streets.

Here is a link: Who Killed Princess Diana?