Plato Cacheris and Jacob A. Stein are the new lawyers for Monica Lewinsky

Monica S. Lewinsky looked on as Plato Cacheris, left, and Jacob A. Stein appeared in Washington after they had been retained by Ms. Lewinsky, who parted ways with William H. Ginsburg. 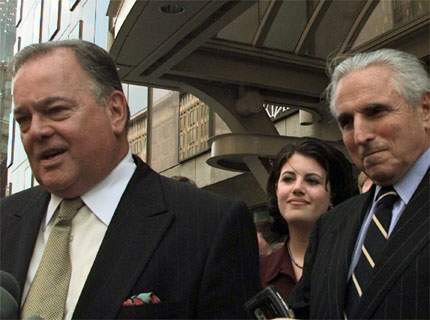 Cacheris was co-counsel for John Mitchell in the Watergate prosecution. Cacheris also represented convicted CIA spy Aldrich Ames in perhaps the worst espionage case in U.S. history. And he was the attorney for Iran-Contra figure Fawn Hall, Oliver North's secretary.

Stein is the former independent counsel who investigated and cleared one-time Attorney General Ed Meese. He also served as a defense counsel in the Watergate case. He is no stranger to sexual scandal. He represented former Oregon Sen. Bob Packwood against allegations of sexual harassment.

My opinion is that both as a woman and as a potential defendant, Monica’s course is clear. As a woman, regardless of what Monica did or did not do with the President, she must never reveal it. Rightly or wrongly, women who kiss and talk about afterwards are not called women any more. They have other terms for them.

Look at what happened to Judith Campbell Exner. She was followed and hounded for years. The FBI, the CIA and various Congressional committees were after her long before her name was publicly known. In spite of all this, when, under great duress, she was finally forced to admit 12 years later that she had been President John F. Kennedy’s girlfriend, she was ruthlessly vilified for slandering the good name of the president. To this day, you will never read anything good about Judith Campbell Exner, even though she did nothing wrong.

This is a good lesson for Monica. No matter what happens, she has to keep her mouth shut when it comes to the president, even though she may have had it open when she went to him in the past.

This also so happens to be the best defense strategy.