Here is the second page of a death threat I received in the mail on November 4, 1982. The envelope was postmarked Toronto.

This letter was written after Honzagool had returned to Pakistan on August 28, 1982, leaving our daughter, Shamema, in my possession. Honzagool never returned to America.

Raja Ehsan Aziz was conducting a court case in the Bronx Supreme Court for the recovery of the child, but was having difficulty because the mother was in Pakistan. He did obtain an ex-party order for the child to be handed over to the court, but this order was stayed. 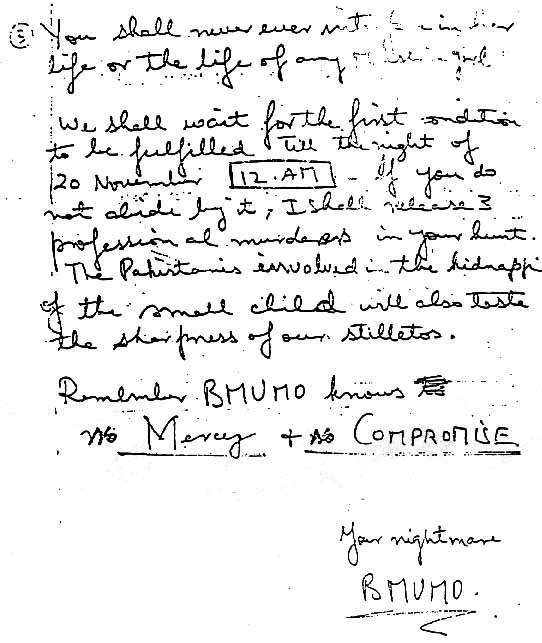 When I received this letter and the letter which followed it, I believed that it really was written by a member of a so-called "Black Muslim" organization. I turned this letter over to Jim Allen of the FBI. The FBI still has it. Although I did not really believe that they were going to kill me, I felt that there was a chance, however small, that they might, and so I went into hiding for three years. On November 19, 1982, I left my home. I drove my car to El Salvador. I later drove it to Panama, left it there, where it still it today, and went to Pakistan. I then went to Thailand, China, Japan, Korea and the Philippines. This entire trip took three years.

Charles and Shelby Roberts obviously did not write this letter, but they knew about it and exploited it. They used it effectively to blackmail me when they became interested in obtaining my daughter. They also often imply that I wrote this letter to myself.

This letter caused me to change my lifestyle and personal habits. Ever since, I have rarely revealed my actual residence address. None of my friends and acquaintances know where I am living right now, for example. My actual address is in cyberspace. You can write to me there.

I found out the name of the person who wrote this letter in November, 1983, one year later, when I went to Chitral, Pakistan to try to bring my wife, Honzagool, back from there to help take care of our daughter.

A graduate student in nuclear physics at the University of Toronto had been writing letters to the relatives of Honzagool proposing his marriage to her. His name was Ijaz Mansour Quershi. He was from Pakistan. His letters stated that his father was named Abdul Qadir and that his father would be coming to Chitral to arrange the details of this marriage. However, his father had never come.

In comparing the handwritings, plus other things about these letters, is was obvious that he had written them all.

Apparently, he believed his own propaganda. He did not think that I had good relations with the relatives of my wife in Chitral and that I would be able to go there and read his letters.

In 1985, I went to Toronto, Canada to investigate this matter further. I found his picture on the wall of the physics department of the University of Toronto. He was short and dark, with a beard, a typical Pakistani.

I spoke to his faculty adviser and to the chairman of his department. When they saw this letter, they agreed that this was written by him. His faculty adviser had graded many handwritten papers handed in by Mansour.

His faculty adviser stated: "He is one of our most brilliant students. The most difficult courses are easy for him."

I understand that Mansour later got his Ph.D. degree in Nuclear Physics and went back to Pakistan to work in his country's nuclear weapons development program.

By writing these letters, not only did Mansour not get what he wanted, but he greatly contributed to the present situation, where my daughter has been kidnapped and is being held by fanatical Christian fundamentalists.